To fans of the genre of Military Fiction, RJ MacDonald’s  ‘A Distant Field’ might well be the book of the year. This harrowing journey through World War I begins aboard the RMS Lusitania and ends on the edge of the world.

Stuart McReynolds, and his brother Ross, Scots-Americans bound for the old country, are aboard the RMS Lusitania when it is torpedoed by a German U-boat off the south coast of Ireland in May 1915.

Despite frantic rescue efforts, they watch their family drown in front of their eyes. Having escaped the doomed ship, they are rescued by four young Irishmen and, together, the band of young men enlist in the Seaforth Highlanders, the remotest of all Scottish regiments in the British Isles.

They are soon deployed and within hours of landing in the British sector are thrown into the brutal battles of Gallipoli and must learn to fight—and to survive—in the bloody battlefields under a blazing Aegean sun. Stuart recoils against the carnage of the battlefield, but with his brother and friends by his side, fights gallantly forward, clinging to hope and their rapidly depleting trench line.


“The attention to detail, sentence-for-sentence, is stunning, and really builds the world.” –Cornerstones

“The author has managed to avoid many of the pitfalls of a debut author and is to be commended….Overall this is a highly promising text….” —Jefferson Franklin

RJ MacDonald grew up in a small coastal fishing village in Scotland. He crossed the Atlantic and attended Cate School before studying both military history and social science at Berkeley, where his dissertation professor was Stephen Ambrose (Band of Brothers). After graduating with two BAs, he enlisted in the US Marines as a reservist. Boot camp in San Diego went well for five days until the drill instructors read his personnel file and discovered not only a ‘Berkeley hippy freak infiltrating their Marine Corps,’ but also one with an accent. ‘You speak funny, Private. Are you Russian?’ Meritoriously promoted twice, he served in a helicopter support squadron at NAS Miramar as an expert marksman and marksmanship instructor before returning to Scotland to complete two masters degrees and joining the Royal Air Force Reserves- ‘You speak funny, sir. Are you Canadian?’ Parachute qualified with jump-wings from Holland, the Czech Republic, and US Special Operations Command Europe, he deployed as an operational intelligence officer with a helicopter detachment during the war in Iraq, and then again to Cyprus during the conflict in Libya.

Now a director within a small research company, he also serves on a Royal National Lifeboat Institute volunteer lifeboat crew tasked with a 24/7 all-weather search and rescue role in some of the roughest seas in the world. He lives with his wife, three children, and a very cute but equally stupid cocker spaniel, in the East Neuk of Fife, where he grew up. He can often be found tapping away on his laptop while waiting for various after-school clubs to finish.

Why do I write? Well, there’s nothing like a good book. A good book robs you of sleep as your mind becomes immersed in another world and presents the cruelest of dilemmas—keep reading but shorten the experience, or put the book down for another day. I usually go for just one more chapter…

Why write a World War I historical novel? I think you could rebuild Hadrian’s Wall with the amount of Roman centurion sword-and-sandal novels on the bookshelves, and there are shelf-loads of Napoleonic, Civil War, WWII, and post-WWII novels—but very few modern WWI historical novels, and even fewer that comprise a series. After scanning bookshelves and exhausting libraries, I decided to try and fill the gap by writing my own.

My interest in WWI began as a boy. Recent research has confirmed that not a single village in Scotland is without a war memorial, and three of my own family fought in the war. While much of the attention surrounding the centenary remains focused on France, I was always interested in the lesser known WWI battlefields: Gallipoli, Salonika, Palestine, Mesopotamia, and the Russian Intervention of 1919. When I was deployed to Iraq, I came across a large memorial plaque for British soldiers, including many from Scottish regiments, who had died there during the war. I left wondering about their stories. My novels encompass those largely forgotten campaigns—while also, inevitably, leading my characters to the Western Front.

I’m an impatient reader when it comes to military novels. I want the action immediately and novels that slowly wind their way towards firing a shot—while detouring off on sub-plots—sometimes frustrate me. So, for A Distant Field, I literally jump in at the deep end with the sinking of the RMS Lusitania, hoping to grab the reader and plunge them into the novel. The action continues throughout the novel with the Quintinshill Disaster: the worst train disaster in British history that killed or wounded close to 500 Scottish soldiers, and then onto the British and French sector at Gallipoli and the bloody battles of Fir Tree Spur and Achi Baba Nullah. I hope the result is a good read.

Captain Dale Dye, USMC (Ret.) of Warriors Publishing Group said, “World War I, the brutal, bloody conflict that killed millions and tore Europe apart from 1914 to 1918, has faded to a footnote of interest only to historians and military enthusiasts. That’s as unfair as it is unwise for the rest of us who need to understand the impact this early conflict had on subsequent world events. That’s why I’m delighted to have a hand in bringing A Distant Field to the reading public. In this work, we get long-overdue insights and a visceral feel for the first modern war that was precursor to all the myriad conflicts that followed.”

A Distant Field is his debut novel and the first in The Seaforths series. The first half is available now at warbooks.pub/WWI and the complete first book of the series will be published on 11 November 2018, the 100th Anniversary of Armistice Day. His second novel, The Chosen Heroes, is underway.

This book and other great works of military fiction and nonfiction are available through Warriors Publishing Group and wherever fine books are sold. 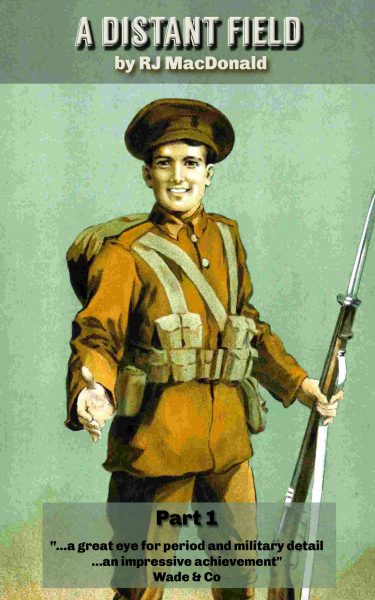