When history is visceral and experiential, it is typically more compelling and engaging than when it is taken out of the human context.  The subject is notorious for being presented in dry and uninteresting ways, but that is mainly because most people are exposed almost exclusively to the sterility of classroom lecture.  When it comes to the history of the Second World War, classroom instruction is critical to understanding the big picture of the conflict, but bringing clarity to the individual soldier experience is something that is typically best edified by good old-fashioned fieldwork.

by Martin K.A. Morgan and very special thanks to Brian Domitrovich

This can be done by visiting a battlefield or, in some countries, by live-firing the weapons used in a given war.  As described in my January 22, 2017 post about shooting the German MG.42 machine gun, a day at the range can offer a powerful and memorable insight into the lives of those who experienced combat first hand.  But even in the U.S.A. where it is possible to own just about every type of weapon used in ground combat between 1939 and 1945, one category is usually missing: mortars.  Each country involved in World War II used them to great effect in circumstances where indirect, high-angle fire was needed but field artillery fire was unavailable.  They were dangerously accurate, and they could operate in rain or shine – in the blistering heat or the numbing cold.

Despite their prolific use and significant importance to the story of World War II combat, most American collectors do not own mortars, and as a result they are largely only understood in the abstract.  We read technical details about weight, range, accuracy and explosive power, but we just do not have access to them like we have access to rifles, pistols and machine guns.  For that reason, I recently traveled to western Pennsylvania for a day at the range with Brian Domitrovich, owner of three live U.S. World War II mortars: a 60mm, an 81mm and a 4.2-inch.  Brian’s possession of these weapons is regulated by the National Firearms Act of 1934, which designates them as “destructive devices” and holds him up to stringent qualifications for their ownership.

For him to be eligible to purchase these registered destructive devices, Brian had to be a U.S. citizen over the age of 21 with no criminal arrest record, he was required to pay a one-time $200 transfer tax for each weapon, and he had to wait between six and twelve months while each transfer application was reviewed by the Bureau of Alcohol, Tobacco, Firearms and Explosives (the “BATFE”).  In other words, the 1934 National Firearms Act created a heavily regulated category of civilian ownership that Brian qualified for, thus allowing him to make it rain 60mm, 81mm and 4.2-inch mortar rounds.  We hauled all three weapons out to the Beaver Valley Rifle and Pistol Club near the township of Patterson Heights, Pennsylvania and spent the day putting each tube through its paces.


For each mortar, we fired only inert projectiles – meaning that only propelling charges were used and none of what we fired exploded downrange.  The only partial exception was the M2 mortar, through which we fired BATFE-approved 60mm reusable training projectiles made exclusively by ordnance.com.  These projectiles are equipped with a proprietary fuze assembly that produces a non-lethal impact explosion through the use of a point-detonated 20-guage blank shotgun shell.  Although they do not distribute deadly fragments, they do produce a report downrange that simulates the experience of shooting a 60mm M49A2 high explosive round.

The smallest and lightest of the three mortars being demonstrated that day, the M2, consists of a 12.8-pound tube, a 16.4-pound bi-pod/mount, and a 12.8-pound baseplate.  With an overall 42-pound weight, the M2 gave U.S. fighting forces during the Second World War the kind of handy mobility that made it easy to provide company-level fire support, and even advance with an attacking echelon if necessary.  Although it can deliver concentrations of fire to a maximum range of 2,000 yards, we had to keep our rounds within 200 yards so as not to lose any of the five-pound reusable training projectiles.  When we went downrange to recover the rounds, they were all sticking out of the ground like lawn darts within a few feet of each other. 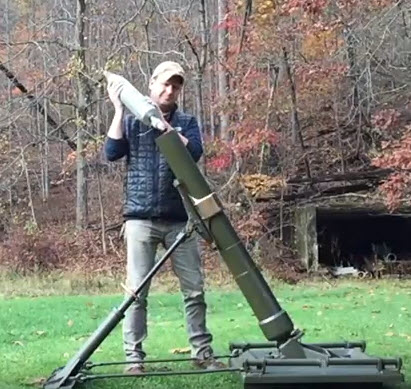 Moving up in size and weight, we fired the 81 mm M1 mortar next, but the space constraints at Beaver Valley Rifle and Pistol Club prevented us from realizing that weapon’s full range potential.  With a full increment charge and a 6.87-pound M43A2 high explosive round, the M1 mortar could hit a target almost 3,300 yards away, giving it a significant range advantage over the 60mm M2 mortar.  Using a minimum propellant charge, we were able to keep all of our 8-pound, 81 mm projectiles in one area but they still dug deeper into the ground than the lighter 60mm projectiles did.  The M1’s greater capabilities come with a cost though: greater weight.  With a 44.5-pound tube, a 46.5-pound mount, and a 45-pound base plate, the total package is almost 100-pounds heavier than the 60mm mortar.


Despite its weight though, the 81mm mortar was an important part of the Table of Organization and Equipment of U.S. Army and U.S. Marine Corps maneuver battalions throughout World War II.  It was even a tool used by airborne units, and was dropped in parachute bundles during Operations Neptune, Market Garden, and Varsity.  Ground combat units appreciated the 81mm mortar because of its mobile and hard-hitting qualities, and that is why it occupied a prominent place in the arsenal of American fighting forces during the Second World War. 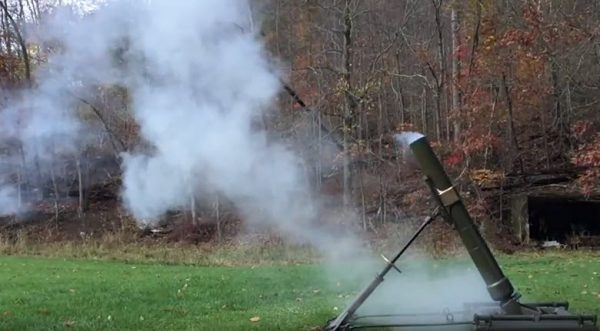 Last but not least, we fired the mighty 4.2-inch M2 chemical mortar.  Developed before World War II as a means of delivering toxic agents (thus the name “chemical mortar”), the U.S. Army Chemical Weapons Service eventually turned the 4.2 into a weapon capable of delivering high-explosive fire.  But TNT, and Mustard Gas rounds were not on the menu for our live fire exercise, so M335A2 Illuminating Rounds were used instead.  Weighing 17-pounds each, they tumbled through the air like parabolic watermelons and half-buried themselves in the mud at the very edge of the designated long-range lane.  While convenient for our purposes, the M335A2 rounds need the weight of the illuminating chemicals in them to stabilize in flight.  The ones we fired that day were inert and (therefore) empty, so there was only so much the barrel could do.

Unlike the 60mm and the 81mm mortars, the “four deuce” uses a rifled barrel to stabilize its projectiles in flight, and those projectiles engage that rifling through the use of a brass obturating plate.  While the barrel did its job with no problem and the rounds caught the rifling as they were designed to, after leaving the tube’s muzzle at 700 feet per second they gradually lost their stability and started to tumble.  Still, it was lots of fun throwing them skyward in an offering to the spirit of Saint Barbara.  Once again though, we had to generate as little range as possible, which was not an insignificant challenge with the “four deuce.”  That weapon can throw a round out to 4,400 yards (2.5 miles) and we had only 300 yards to play with, so we were barely scratching the surface of what that tube could do.


Weighing-in at 333-pounds overall, the “four deuce” is a beast of a weapon.  Just to put this in perspective, it weighs the same as eight 60mm mortars or two and a half 81mm mortars.  It’s base plate alone weighs as much as I do, which only became an issue when we had to carry it up the stairs from Brian’s basement to get it to his truck.  Every bit of that effort was worthwhile though because it offered a priceless opportunity to appreciate the difficulty of manhandling this weapon that contributed so meaningfully to allied victory in World War II.  The 4.2-inch mortar fought for the first time in the Sicily campaign in 1943 during which it fired over 35,000 rounds in 38-days.  It then went-on to fight it’s way across difficult terrain in Europe and islands in the Pacific. 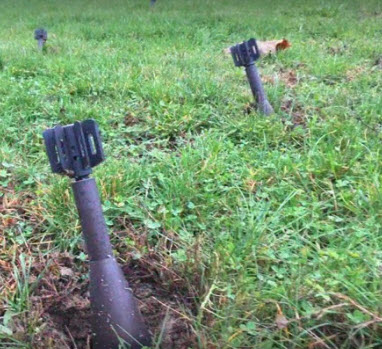 The Army used it, the Marine Corps used it, and even the U.S. Navy used it on landing craft converted into mortar gunboats under the designation LCI(M).  Though it never delivered a gas attack in combat, it did put down vast quantities of TNT and smoke during World War II and again during the war in Korea.  Having the chance to shoot the “four deuce” – alongside its 60 mm and 81 mm cousins – provided the kind of visceral and tactile experience that I value because it helps bring another element of the story of World War II into sharper focus. 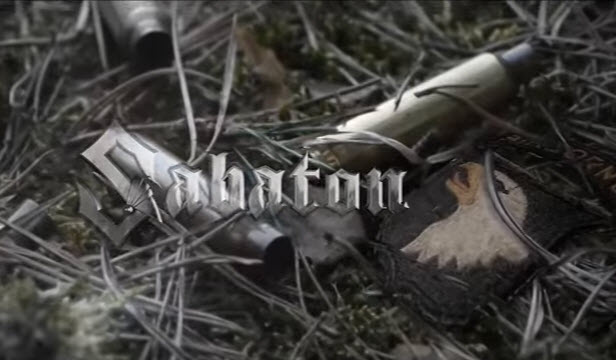 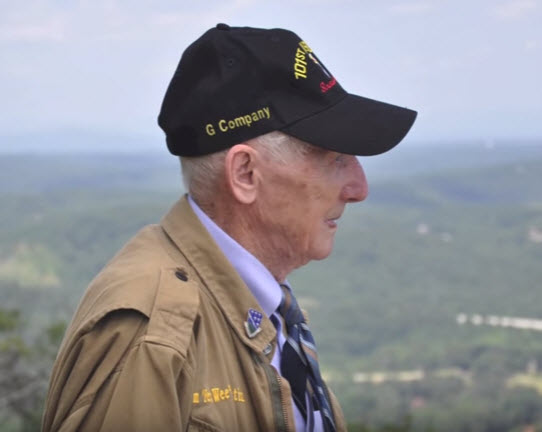