IN SILENT TRIBUTE- Back in 2002 while writing Tonight We Die as Men (TWDAM) with Roger Day we described a plane crash on June 6, 1944, near a small isolated Norman farmhouse known as Les Rats situated one mile north of the wooden bridges at Brevands. The two bridges were the D-Day objectives of 3rd Battalion, 506th Parachute Infantry Regiment, 101st Airborne Division, who were the main subject matter of our now historic book.

By Ian Gardner- Author of Tonight we die as men, Deliver us from darkness, No victory in valhalla and Airborne: the combat story of Ed Shames

Time had dimmed the collective memories of our French and American veteran contributors but undaunted we persevered and eventually concluded that ‘our plane’ was probably a single-engine US fighter – possibly even a P-47 Thunderbolt. After we learned that a group of nomadic gypsies had cleared away the wreckage in the late 1940s we felt there was little point in any further investigation and besides it had no real synergy with our story at the bridges.


Following its release in 2009, TWDAM peaked the interest of British ex-pat Tony Graves, who after several visits to the long overgrown and now water-filled crater at Les Rats, gained permission from the French authorities and began a series of excavations that would span the next two years. The following summer Tony was shocked to discover that ‘our P-47’ was in fact a British Avro Lancaster, codenamed ND739Z belonging to 97 Squadron from the Royal Air Force. The Ministry of Defence (MOD) here in the UK still had the aircraft and crew listed as ‘missing’. It is also interesting to note that right from the outset the MOD were very much against Tony digging but were powerless to stop the exhumation of what they considered to be a potential war grave. However, by now Tony was on a mission to locate what might remain of the wreckage and with it hopefully the missing crew. It soon became apparent that ND739Z was no ordinary ‘Lanc’ nor was its pilot, Wing Commander Edward Carter and his seven crew members (one more than usual) who collectively were among the highest ranked and decorated in Bomber Command. 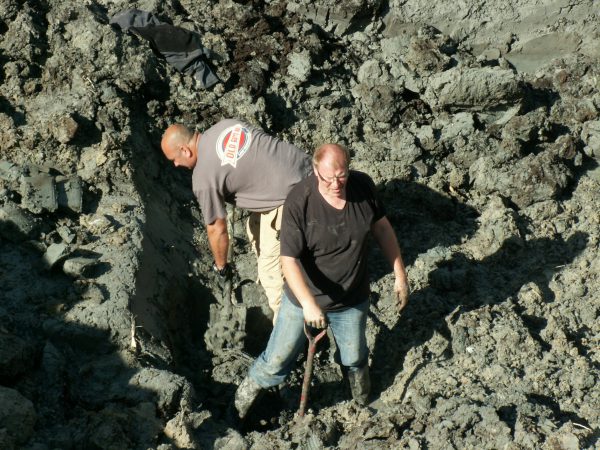 During the early morning hours of D-Day, 97 Squadron’s task was to bomb the German coastal artillery site at Pointe du Hoc. As lead aircraft, ND739Z was equipped with H2S, a highly specialised and secret ground scanning radar system, first introduced in 1943 (hence the need for an extra crewman). Ironically, unbeknown to the men or their RAF superiors, the guns at the Pointe had been moved to a nearby country lane overlooking Utah Beach and as such, the mission was already doomed to failure. Shortly before 5am, after successfully bombing the target, Carter and his squadron came under unexpected attack from a Focke Wolfe FW190, flown by Hauptmann Helmut Eberspächer. Leaving a trail of smoke and flames in their wake, Carter’s plane lit up the early morning skies off the Normandy coast before slamming vertically into the ground at Les Rats. Based near Tours and by pure chance Eberspächer just happened to be patrolling along the beaches when he spotted the Lancaster’s silhouetted above him. Within four minutes the German night fighter ace had brought down three British bombers including ND739Z. 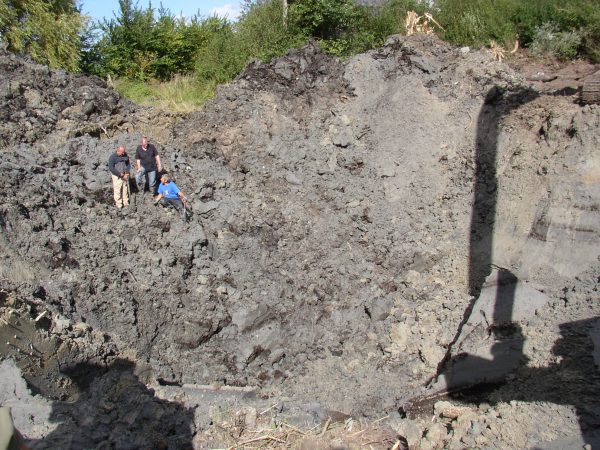 In late September 2012 Tony Graves invited me to join him and his team for what was to be their last and final dig at Les Rats. From a depth of around 30 feet, two Merlin engines, several tons of wreckage and a number of personal items came to the surface but bizarrely the remains of the crew were nowhere to be found? This led Tony and myself to speculate that any human remains had probably been removed and reburied by the gypsies who salvaged much of the shallow surface debris for scrap after the war. Tony kindly allowed me to take a souvenir back to the UK – a shattered piece of engine block complete with bolts, split pins and inspection stamps. 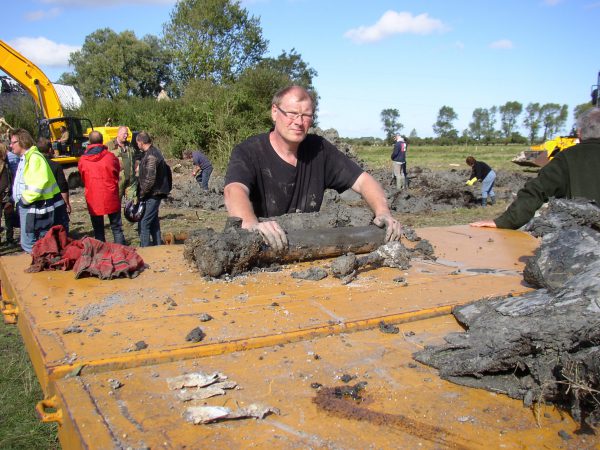 On October 4, 2012, my local newspaper The Camberley News and Mail published an article about the dig. A few days later I received an emotionally charged phone call from James Chapple, the journalist who had covered my story. James told me to sit down and then said, “Ian, you won’t believe this but I have just spoken to Keith Dunning, whose father Guy, was the Flight Engineer on that plane!”
Unbelievably Pilot Officer Guy Dunning had lived in Camberley (three miles from where I live now) before the war where he had met his wife Lillias. By an amazing twist of fate, Keith who was 18 months old when his dad was posted as missing now resides in the nearby town of Yateley – literally just around the corner from my mother Joan! The next week after his article was published as a follow up to mine, Keith showed me all of his dad’s letters (including his last) and explained that the attack on Pointe du Hoc was Guy’s 54th operational sortie and that in the April he had not only qualified as a Pathfinder but had also been commissioned and awarded The Distinguished Flying Medal. Sadly Keith’s mum Lillias, had died a few years before the crash site was discovered, always believed that her husband’s aircraft had come down in the English Channel. Strangely she felt that Guy had survived and held on to this unshakable belief until the late 1950s when she finally accepted the fact that her husband was never coming home. 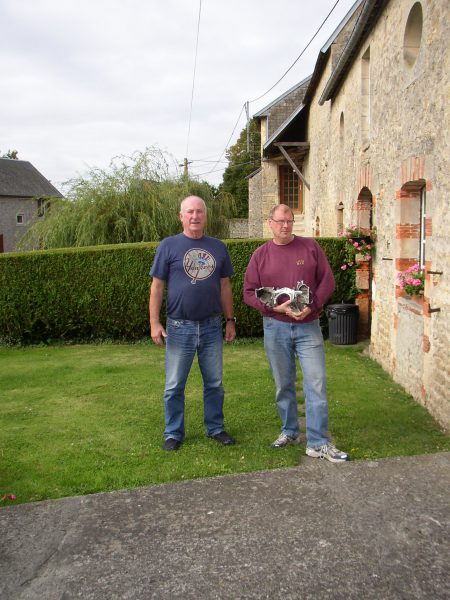 I donated my souvenir piece of engine wreckage to Keith and it now rests in his fireplace on a plinth in silent tribute to the father he never knew. This story is still unfinished and perhaps one day someone will stumble across the final resting place of Guy Dunning and his comrades – until then their names will remain on the Air Forces Memorial at Runnymede along with 20,276 other men and women who have no known grave.