The .45 caliber submachine gun M3 is often indicated as being a success story of small arms design and development during World War II.  Born of the necessities and exigencies of a full national wartime mobilization, it is best known for the economy of scale it provided and the modesty of its manufacturing costs.

by Martin K A Morgan


At peak production, M3s were a bargain at $20.94 each – that’s less than half the cost of the cheaper, mass-production version of the Thompson submachine gun.  Although low cost was a major factor in the M3’s success, so too was the speed of its development and adoption.  The project went from a concept on paper, to the T20 prototype, to adoption and production within just seven months, a record that no other firearm in U.S. military history has ever challenged.  When it went into production in May 1943 at GM’s Guide Lamp Division plant in Anderson, Indiana, the M3 was a reliable open-bolt submachine gun weighing just over eight pounds with a fully loaded 30-round detachable box magazine.  It’s design made extensive use of sheet metal stampings to include the two halves of the receiver assembly, the trigger, the rear sight, and a crank handle on the right side of the gun used to retract the bolt before firing.  The M3’s sheet metal construction made it lighter and cheaper to produce, and gave it an appearance resembling an auto mechanics grease gun.  But sheet stampings also created one weakness that would soon reveal itself on the battlefield. 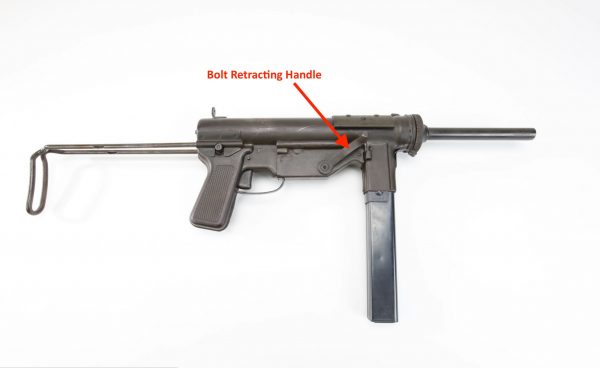 A right side view of M3 submachine gun #0061260 – an early pattern Grease Gun produced at GM’s Guide Lamp Division plant in Anderson, Indiana in 1943. The red arrow shows the delicate bolt retracting “crank handle” that created the need for a field modification. (Photo courtesy of the National Firearms Museum)

On Tuesday, June 6, 1944, U.S. troops used the M3 Grease Gun in action for the first time.  During the weeks that followed, it fought a vigorous campaign stretching from Normandy through to the liberation of Paris and the push to the Siegfried Line.  Soldiers carried it up hill and down valley through the adversity of dust, rain and, eventually, even the snow.  They were beat-up as the troops climbed on and off of trucks, half-tracks, and tanks.  While an M3 could survive being dropped on its left side without affecting its ability to function, dropping one on its right side was another matter entirely because that is where the weapon’s fragile sheet metal retracting handle was mounted to the trigger housing assembly. 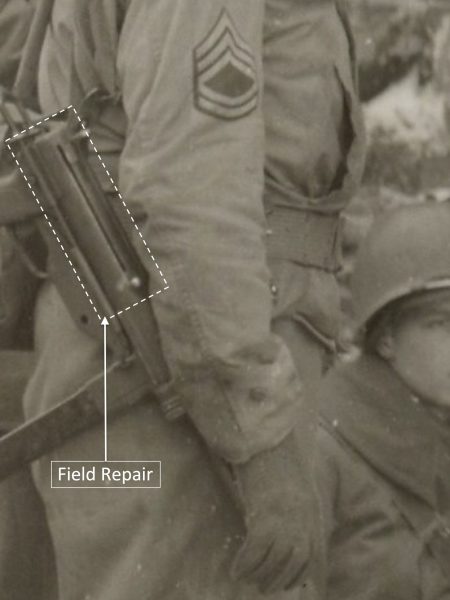 An officer in the headquarters of the 253rd Armored Field Artillery Battalion/6th Armored Division reads the “Articles of War” to his men on January 20, 1945 in the village of Mageret, Belgium three miles east of Bastogne. Note the Sergeant First Class at far left is armed with a field modified M3 submachine gun. (Official U.S. Army photograph)

On numerous occasions during the closing months of 1944, U.S. Army soldiers dropped M3 Grease Guns in such a way that they broke off crank handles.  With no retracting mechanism, the bolt could not be drawn to the rear and, the weapon could not be used.  At the time, the Army’s ordnance companies were ready to repair just about any infantry weapon in inventory, but not the brand new Grease Gun.  In the rush to develop and the adopt the weapon, the potential for breakage of the inherently vulnerable crank handle was overlooked with the result that, when it finally began to happen in France after the D-Day, there was no prescribed method of repairing the problem and, more importantly, no spare parts.  This meant that repairmen had to improvise and make due with what they had on hand. 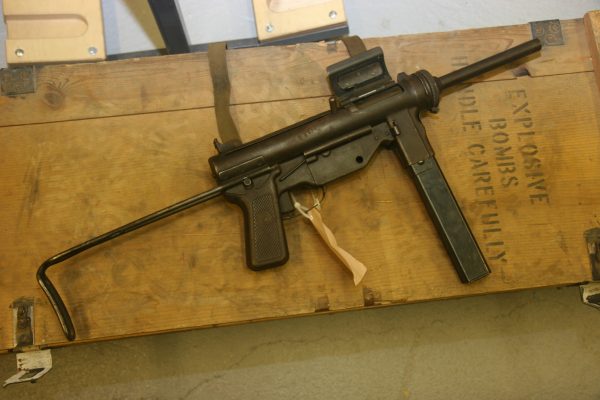 A field modified M3 submachine gun in the collection of Musée National d’Histoire Militaire (the National Military History Museum) in Diekirch, Luxembourg. The weapon’s crank handle has been removed, a slot has been cut in the receiver and a makeshift cocking handle has been added to the bolt.

The solution was straightforward and simple: ordnance company personnel started by removing what was left of the retracting handle assembly from each damaged weapon, then used an end mill to cut a seven-inch long slot into the right hand side of the receiver at the 2 o’clock position running from just behind the weapon’s ejection port.  This accommodated a crudely hewn steel bolt handle that inserted through an enlarged opening at the forward end of the slot and entered a hole drilled into the back end of the bolt assembly.  It was not a pretty repair, but it worked.  A few archival photographs of men from General George Patton’s Third Army taken around the time of the Battle of the Bulge show Grease Guns repaired in this manner.  In addition to that, the collection of Musée National d’Histoire Militaire (the National Military History Museum) in Diekirch, Luxembourg has in its collection five M3s that have received this field modification.  Considering the fact that the Third Army operated in Luxembourg during and after the Battle of the Bulge, it looks like this field modification may have been confined to the ranks of that specific unit.  Interestingly enough though, a product improvement was already in development back in the USA that would make this design shortcoming superfluous. 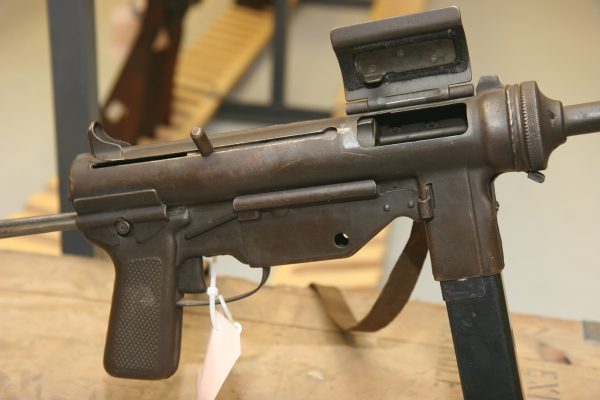 A field modified M3 submachine gun in the collection of Musée National d’Histoire Militaire (the National Military History Museum) in Diekirch, Luxembourg. The weapon’s crank handle has been removed, a slot has been cut in the receiver and a makeshift cocking handle has been added to the bolt.

As early as April 1944, Guide Lamp was working on the modified M3E1 submachine gun.  In addition to a number of other design refinements, it featured the complete elimination of the M3’s crank handle assembly and its replacement with a simplified, and indestructible, finger hole in the bolt.  The substantial weight of the M3’s bolt was such that the pressure exerted by the weapon’s dual mainsprings was only eighteen-pounds.  This meant that the old crank handle apparatus was not just unnecessarily complex, it was unnecessary altogether because the physical effort of retracting the bolt could be managed comfortably by the shooter’s index finger alone.  No lever device necessary.  On December 21, 1944, the M3E1 was officially adopted as the .45-caliber submachine gun, M3A1 – coincidentally at the same time that field modified M3s were fighting the German onslaught 4,000 miles away in the Ardennes Forrest.  Although the fragile crank handle issue was fully resolved with the introduction of the M3A1, the crude and yet perfectly functional field modification that it produced nevertheless says something complimentary about ordnance technicians during World War II.  When confronted with a significant repair job on a new weapon with no replacement parts available, they had to adapt, adjust and overcome, and they had to do it quickly.  It is a testament to the skill and know-how of these Army gunsmiths that they came up with a practical solution under less than ideal circumstances. 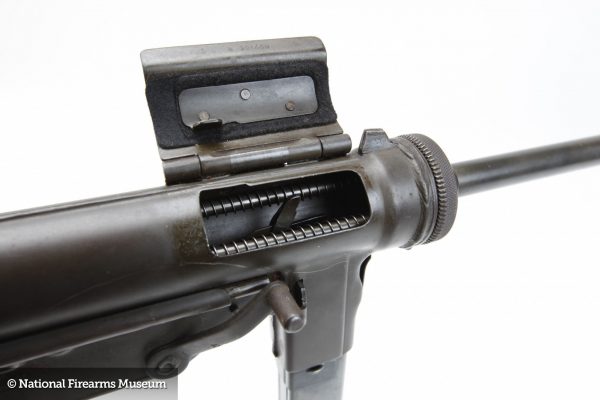