On December 22, 1944, at about 11:30 in the morning, a group of four German soldiers, waving two white flags, approached the American lines using the Arlon Road from the direction of Remoifosse, south of Bastogne. The group consisted of two officers and two enlisted men. The senior officer was a Major Wagner of the 47th Panzer Corps. The junior officer, Lt. Hellmuth Henke of the Panzer Lehr Operations Section, was carrying a briefcase under his arm. The two enlisted men had been selected from the 901st Panzer Grenadier Regiment. – By Kenneth McAuliffe

The Americans defending in that location were members of F Company of the 327th Glider Infantry Regiment, 101st Airborne Division. The Germans walked past a bazooka team in a foxhole in front of the Kessler farm and stopped in front of the foxhole of PFC Leo Palma, a B.A.R. gunner. Palma described the officers as wearing long overcoats and shiny black boots. Lieutenant Henke, who spoke English said, “I want to see the commanding officer of this section.” Palma was at a loss for words, but Staff Sergeant Carl E. Dickinson who had been manning a position nearby walked out to the road and called the group over to him. The Germans explained that they had a written message to be presented to the American Commander in Bastogne. 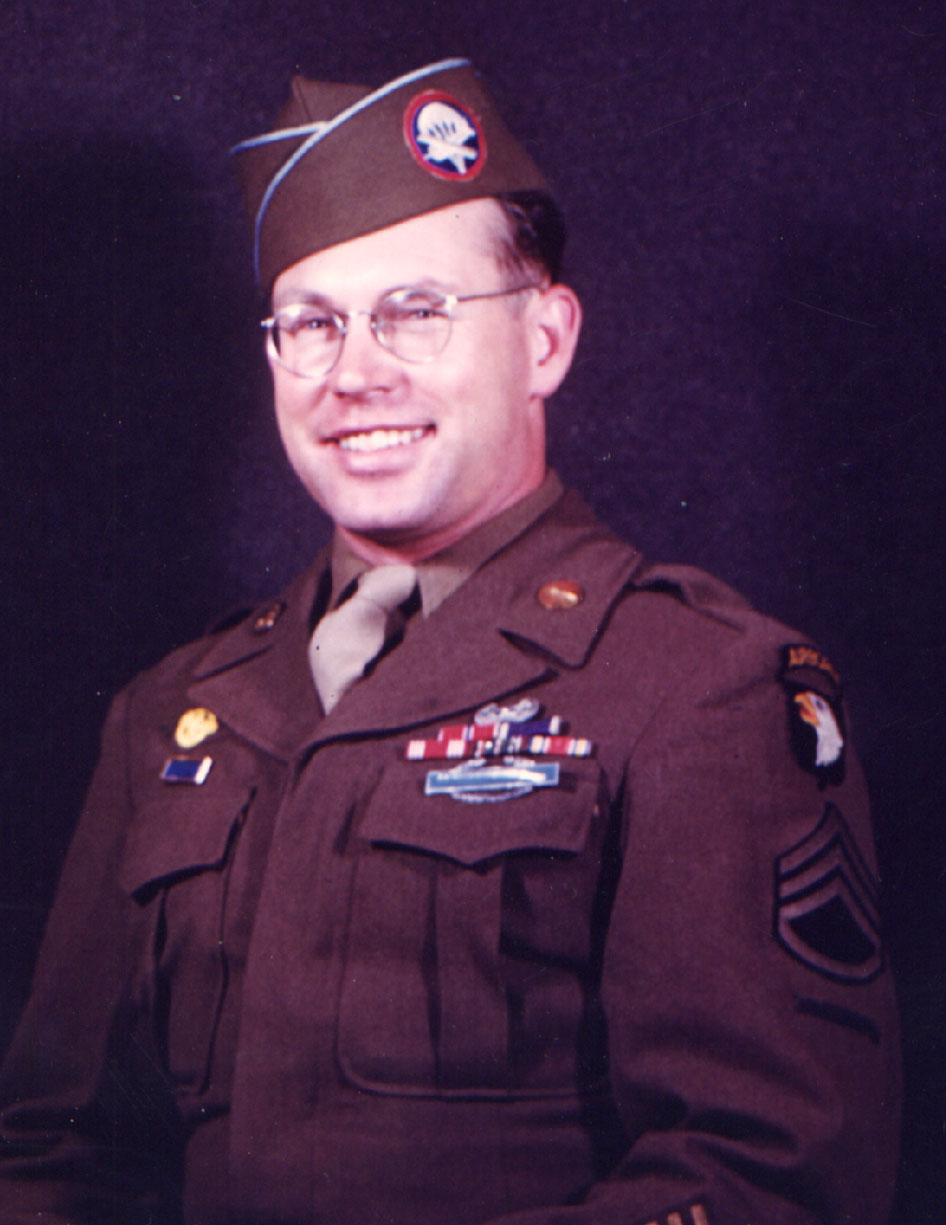 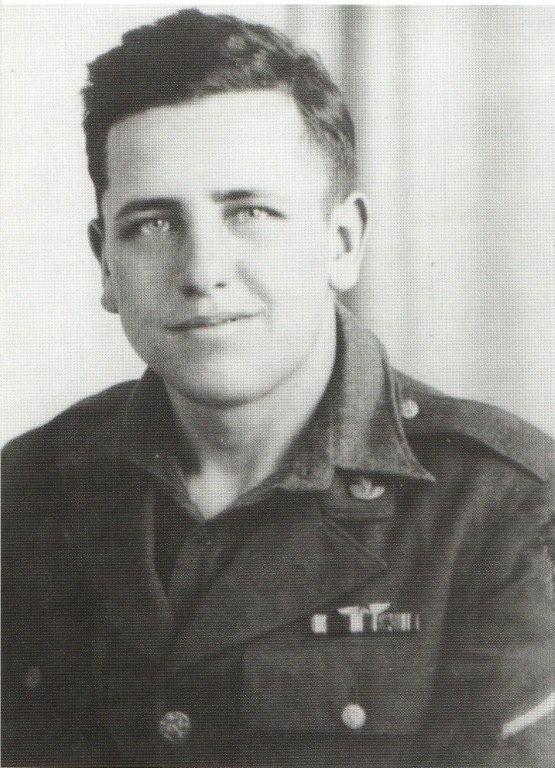 Henke said they would consent to being blindfolded and taken to the American Commanding Officer. In fact, they had brought blindfolds with them. Henke blindfolded Wagner and Dickinson blindfolded Henke. As the blindfolds were being applied, Dickinson was joined by PFC Ernest Premetz, a German-speaking medic of his platoon who offered to serve as an interpreter. However no interpreter was needed.

Dickinson and Premetz left the two German enlisted men there and took the two German officers to the Kessler farmhouse. Tech. Sgt. Oswald Y. Butler, Acting Platoon Leader of the 1st Platoon, and Lt. Leslie E. Smith, Platoon Leader of the Weapons Platoon, told them to take the blindfolded officers to the F Company Command Post. They took the two German officers on a roundabout route to the Command Post of F Company, 327th GIR, which was a large foxhole located in a wooded area about a quarter mile away. Shortly after arriving at the command post, they were joined by Capt. James F. Adams, the F Company Commander, who had been at a forward observation post when he was notified of the arrival of the Germans.

When Adams arrived, 1st Sgt. Constantine A. Pappas informed him that the German major had already presented a written message. The F Company Executive Officer, Lt. William J. Herzke, was on the phone, reading the message to their Battalion Command Post in Marvie. The 2nd Battalion Command Post then notified the 327th Regimental Headquarters in Bastogne. Col. Bud Harper, the 327th Regimental Commander, was not there; he was out inspecting his unit’s positions. The senior officer present was the Regimental Operations Officer, Major Alvin Jones. Maj. Jones notified the Division Headquarters in Bastogne and asked for instructions. He was told to retrieve the message and bring it to the Division Headquarters. He drove to the F Company Command Post and was given the message. The two blindfolded officers were kept in the woods adjacent to the foxhole Command Post. 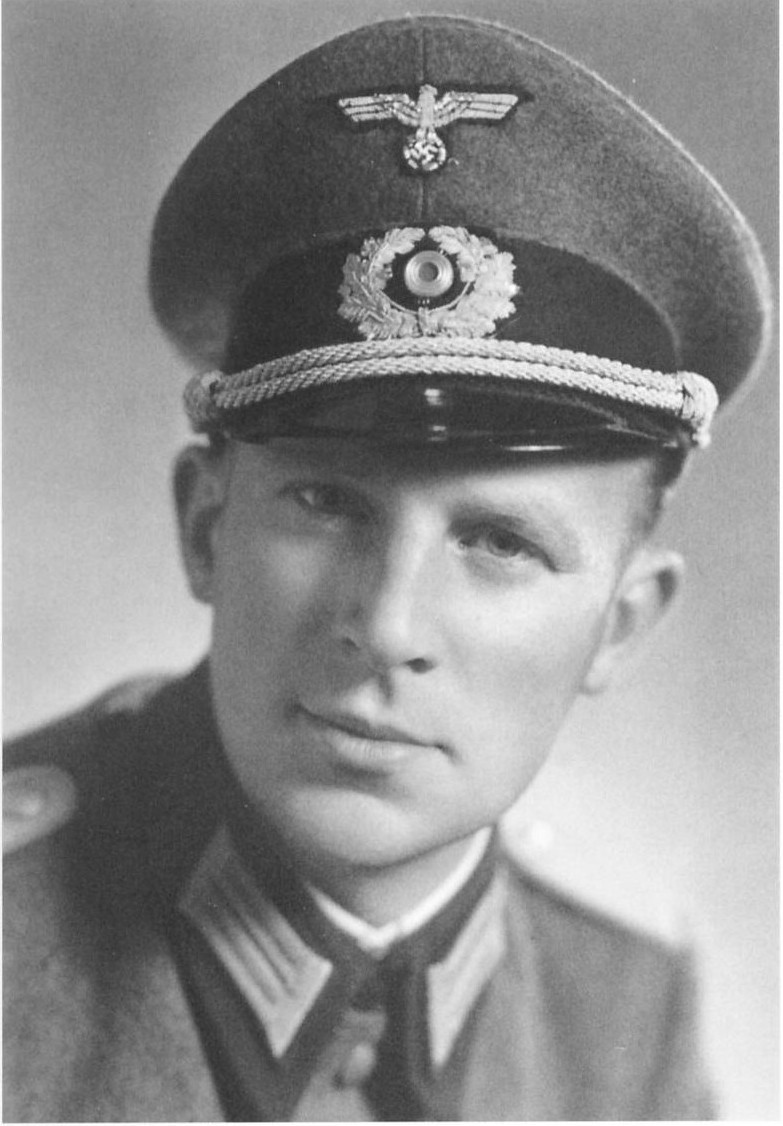 Moore then went back out into the Communications Center where he briefed the rest of the Division staff of the on-going situation, including telling them of McAulliffe’s remark of “Nuts!”

When Maj. Jones arrived with the message, the staff looked at it before taking it in to McAulliffe.

The German surrender demand was typewritten on two sheets. One was in English, the other in German. They had been typed on an English typewriter as indicated by the fact that the diacritical marks required on the German copy had been entered by hand.

This is the English version of the message:

To the U.S.A. Commander of the encircled town of Bastogne.

The fortune of war is changing. This time the U.S.A.
forces in and near Bastogne have been encircled by strong
German armored units. More German armored units have crossed
the river Ourthe near Ortheuville, have taken Marche and
reached St. Hubert by passing through Hompre-Sibret-Tillet.
Libramont is in German hands.
There is only one possibility to save the encircled
U.S.A troops from total annihilation: that is the honorable
surrender of the encircled town. In order to think it over
a term of two hours will be granted beginning with the
presentation of this note.
If this proposal should be rejected one German
Artillery Corps and six heavy A. A. Battalions are ready
to annihilate the U.S.A. troops in and near Bastogne. The
order for firing will be given immediately after this two
hours’ term.
All the serious civilian losses caused by this
artillery fire would not correspond with the wellknown
American humanity.

The Division Operations Officer, Lt. Col. Harry Kinnard recalled that McAulliffe initially asked, “They want to surrender?” Moore told him, “No sir, they want us to surrender.” McAulliffe arose and erupted in anger, which shocked those looking on. He took the paper, looked at it, said “Us surrender, aw nuts!” and dropped it on the floor. Maj. Jones was dismissed. McAulliffe then left the Headquarters to go congratulate a unit on the Western perimeter that had successfully taken out a German road block earlier that morning.

Upon returning to the division headquarters, McAulliffe was informed that Jones had phoned to say that the two German officers were still waiting at the F Company Command Post. Since they brought a formal demand they felt they were entitled to a formal reply and they were to return to the German lines two hours after delivering their message.

McAulliffe asked that Col. Harper be summoned to the Division Headquarters. Harper, who was still inspecting his units’ positions, was contacted by radio. 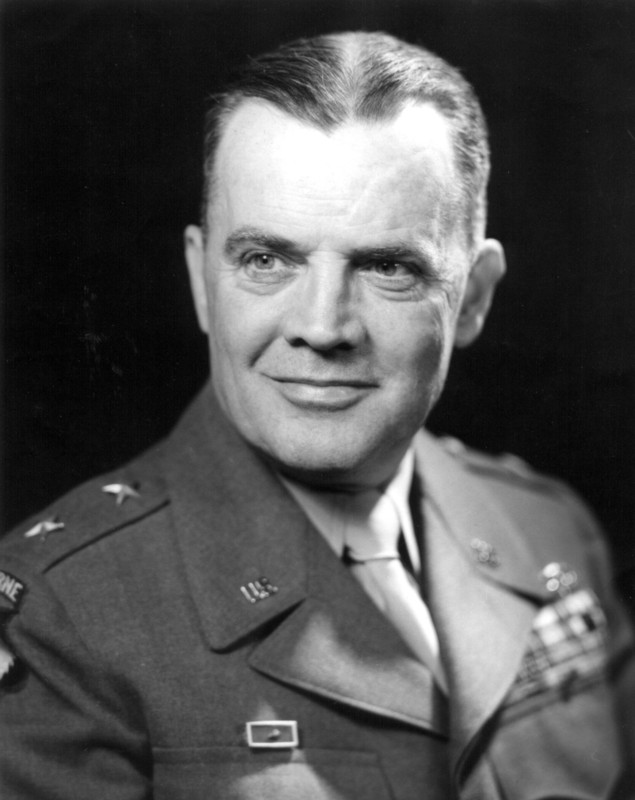 When Harper arrived at the Headquarters, he was asked to wait outside of the closed door to McAulliffe’s quarters. Inside, in the presence of his staff, McAulliffe wondered aloud, “Well, I don’t know what to tell them.” At that point, Kinnard said, “What you said initially would be hard to beat.” McAulliffe asked “What do you mean?” Kinnard, said, “Sir, you said nuts.” All members of the staff enthusiastically agreed, so McAulliffe wrote it down on a message pad and said, “Have it typed up.”

The reply was typed up, centered on a full sheet of paper. It read:

To the German Commander,

McAulliffe dismissed the staff and asked that Harper come in. McAulliffe initially toyed with him by having him stand in front of Higgins and himself. McAulliffe showed him the surrender demand and asked if he had already seen it. Harper said no. McAulliffe asked him to read it and suggest how it should be answered. Harper was surprised by the request and quickly tried to draft a reply in his head. At that moment, a clerk-typist entered the room and handed McAulliffe a sheet of paper. He looked at it and then showed Harper the typed “NUTS” reply, asking him if he thought that was a proper reply. Harper read it and started laughing. McAulliffe asked Harper to personally deliver the reply to the Germans, cautioning him not to go into the German lines.

Harper took the reply and drove to the F Company Command Post. Harper told Henke that he had the American Commander’s reply. Henke asked if it was written or verbal. Harper answered it was written and he put it in the hand of the blindfolded German Major. Henke asked about the contents of the reply because if it was affirmative, they were authorized to negotiate further. Harper said, “The reply consists of a single word, NUTS!” Henke, not understanding, asked, “Is that reply negative or affirmative?” Harper said, “The reply is decidedly not affirmative”, adding, “If you continue this foolish attack, your losses will be tremendous.” Henke translated for the Major. The Major nodded. 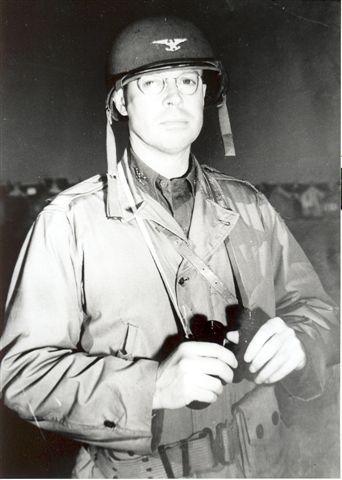 The two blindfolded German officers were then driven, again by a roundabout route, back to their entry point at the Kessler farm. At the farm, the group was rejoined by PFC Premetz. The blindfolds were removed and the Germans opened and looked at the reply. They asked, “What does this mean?” They obviously didn’t understand the American slang. Harper and Premetz discussed how to explain it. Harper suggested, “Tell them to take a flying s**t!” Premetz thought about it, then straightened up, faced the Germans and said, “Du kannst zum Teufel gehen.” He told Harper it meant “You can go to Hell.” Then Harper said, “If you continue to attack, we will kill every goddamn German that tries to break into this city.” Henke replied, “We will kill many Americans. This is war.” Harper then said, “On your way Bud, and good luck to you.” After Henke translated, the major acknowledged. They saluted and the Germans started to walk away. Harper angrily called out to them, “If you don’t know what I am talking about, simply go back to your commanding officer and tell him to just plain, ‘Go to Hell’.” After Henke translated, the major got angry and stormed off. As he passed Palma’s position, he threw his blindfold and Palma caught it. Palma wrote that he didn’t realize the historical importance of that blindfold. He later used it to clean his B.A.R. and threw it away!

The German party returned to their lines. Capt. Adams recorded the time as 1400 hours.

While watching the Germans leaving, Harper began to regret losing his temper, fearing that his attitude may increase the intensity of the attack on his positions. Fortunately, the threatened artillery barrage never happened. Instead, the German Luftwaffe was added to the attack, bombing the town at night.

According to a narrative written by Hellmuth Henke, when the German officers returned to their vehicle, while they were putting their pistol belts back on, Maj. Wagner removed his pistol from his trouser pocket and placed it in its holster, stating that he wasn’t going to get caught without protection.

The two German officers then drove to the 901st Panzer Grenadier Regimental headquarters in Lutrebois. After reporting in, they left to go to the Panzer Lehr Division headquarters located about a mile further south. Just before reaching the Panzer Lehr Headquarters, they saw the car of General von Manteuffel parked by a thicket of trees. Maj. Wagner stopped and reported to the General. They then proceeded to the Panzer Lehr headquarters. General von Luettwitz, the Corps Commander, happened to be there. They presented the “NUTS” reply. Upon hearing the negative reply, General Bayerlein, said it was time to start striking out with the heavy artillery located behind the hill. He was interrupted by General von Luettwitz who stated that the heavy artillery was no longer located there, it had been moved to forward positions past Bastogne. Bayerlein then started to explain how he would attack Bastogne without the heavy artillery, but was again interrupted by von Luettwitz. Von Luettwitz reminded Bayerlein that Bastogne was not his objective and ordered the Panzer Lehr Division to proceed around Bastogne to Rochefort and leave Bastogne to the 26th Volksgrenadier Division. 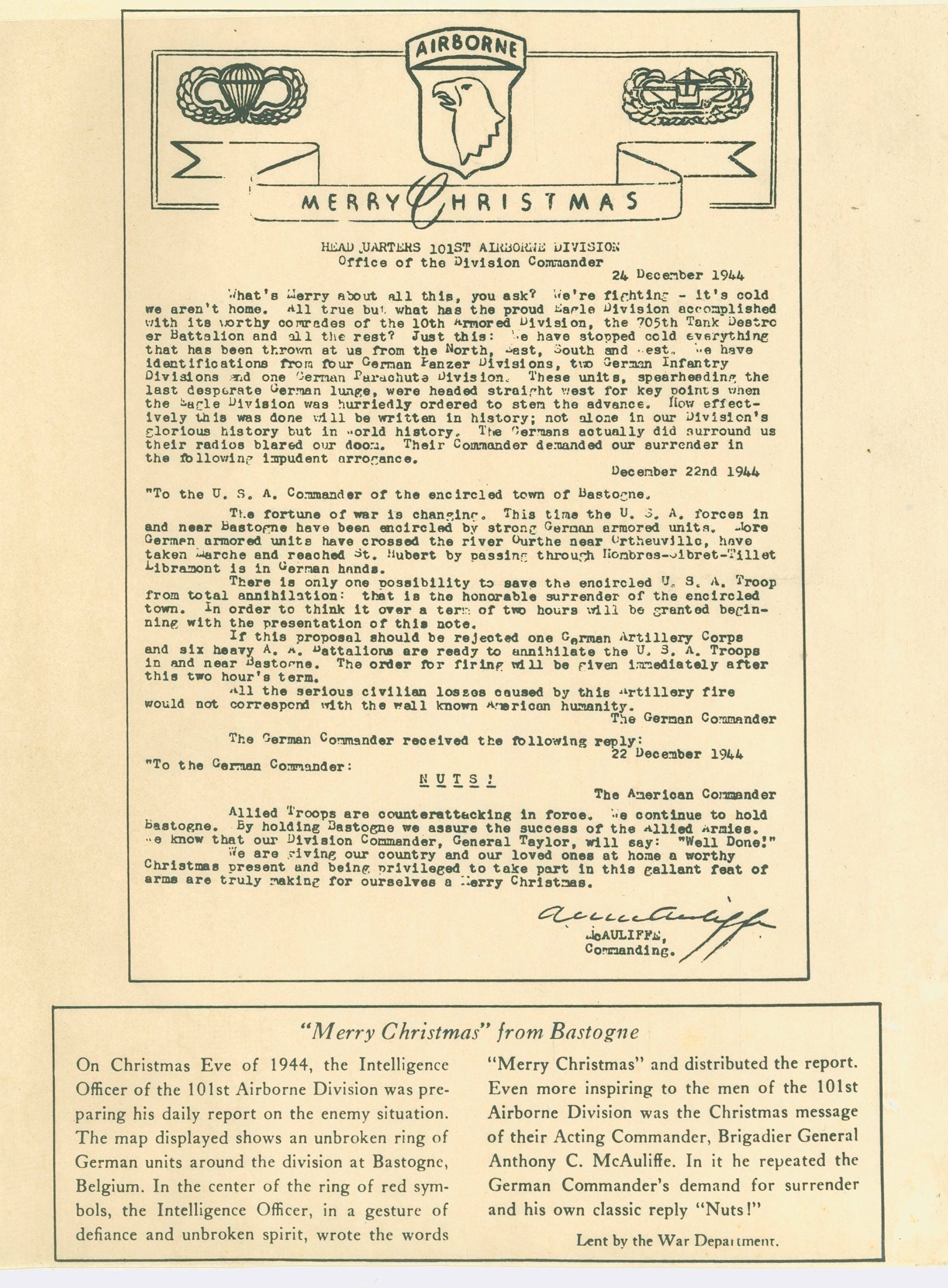