Joe Ronnie Hooper of Moses Lake, Washington, is without a doubt the most decorated veteran of the Vietnam War. Awarded a total of thirty five decorations including: two Silver Stars, six Bronze Stars, eight Purple Hearts and the Congressional Medal of Honor (MOH) – incredibly his tally even exceeds that of the legendary Audie Murphy. 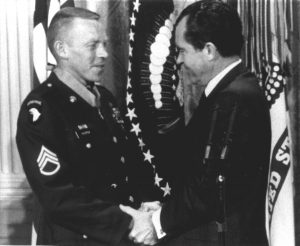 Hooper’s military career began in 1956 when he did a four year stint in the US Navy. By 1960, one year after leaving the Navy, Joe decided to join the Army and served until 1978, retiring as a Captain. During his time as a squad leader in the 501 Infantry, 101 Airborne Division, he was recommended for America’s highest award for his actions on February 21, 1968, outside Hue , Vietnam.

One of Hooper’s personal heroes was Pfc Joe E Mann (502 PIR, 101 Airborne Division). Just like Hooper, Mann was a soldier from Washington but who grew up in Reardon, and just like Hooper, Mann was also awarded the MOH but posthumously in WWII during Operation Market-Garden. Close to the Dutch town of Best near the Wilhelmina Canal, Joe Mann was laying wounded with both arms bandaged and strapped across his chest when a German grenade landed in his foxhole. In a split second decision Mann launched himself onto the explosive and sacrificed his own life to save his comrades. 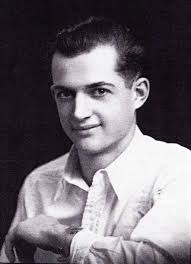 After the war, a group of locals erected the “Joe Mann Monument”, a  tri-paneled base showing the battle topped with the model of a mother pelican sacrificing blood from her own chest to feed her babies. The mother pelican is rooted in ancient legend and symbolism. In time of famine, using her beak, the Pelican pierced her own breast to feed her young preventing them from starvation. Another version of the legend states that the mother fed her starving babies with her own blood to revive them from death but in turn sacrificed her own life.

Hooper felt a special connection to Mann, as apart from sharing the same christian name, both were from Washington and both served with the 101st Airborne Division. As a boy, while still in High School after reading about Mann, Hooper wrote an essay about the Medal of Honor, focusing on Pfc Mann. The young Joe Hooper made several trips to Reardon to collect newspaper clippings to document the story. 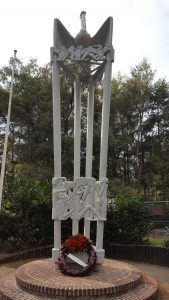 In September 1969, Joe made a trip to represent his former unit during the 25th Anniversary of the liberation of the Netherlands. During that visit, alone Joe went to the “Pelican Monument” and paid his respects before climbing one of the four supporting pillars and attached his own MOH just below the pelican, “he sacrificed himself – I didn’t”, Joe later said. The following day when officials unveiled the monument, despite their obvious delight, the medal caught everyone by complete surprise. After being informed that it was not safe, Hooper retrieved his medal, and at the request of the Queen, deposited the award at Best – where it is still kept today.

After returning the USA, Captain Hooper applied for and was granted a replacement medal, which he later exchanged for another due to the fact that it did not have the traditional green enamel inset on the rays eminating from the star. Joe lived a turbulent life and sadly passed away at the age of 40 in 1979.

A True Soldier and war hero ! 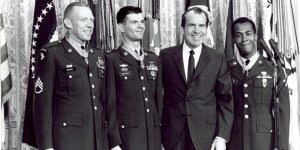 For conspicuous gallantry and intrepidity in action at the risk of his life above and beyond the call of duty. Staff Sergeant (then Sgt.) Hooper, U.S. Army, distinguished himself while serving as squad leader with Company D.
Company D was assaulting a heavily defended enemy position along a river bank when it encountered a withering hail of fire from rockets, machineguns and automatic weapons. S/Sgt. Hooper rallied several men and stormed across the river, overrunning several bunkers on the opposite shore. Thus inspired, the rest of the company moved to the attack. With utter disregard for his own safety, he moved out under the intense fire again and pulled back the wounded, moving them to safety. During this act S/Sgt. Hooper was seriously wounded, but he refused medical aid and returned to his men. With the relentless enemy fire disrupting the attack, he single-handedly stormed 3 enemy bunkers, destroying them with handgrenade and rifle fire, and shot 2 enemy soldiers who had attacked and wounded the Chaplain. Leading his men forward in a sweep of the area, S/Sgt. Hooper destroyed 3 buildings housing enemy riflemen. At this point he was attacked by a North Vietnamese officer whom he fatally wounded with his bayonet. Finding his men under heavy fire from a house to the front, he proceeded alone to the building, killing its occupants with rifle fire and grenades. By now his initial body wound had been compounded by grenade fragments, yet despite the multiple wounds and loss of blood, he continued to lead his men against the intense enemy fire. As his squad reached the final line of enemy resistance, it received devastating fire from 4 bunkers in line on its left flank. S/Sgt. Hooper gathered several hand grenades and raced down a small trench which ran the length of the bunker line, tossing grenades into each bunker as he passed by, killing all but 2 of the occupants. With these positions destroyed, he concentrated on the last bunkers facing his men, destroying the first with an incendiary grenade and neutralizing 2 more by rifle fire. He then raced across an open field, still under enemy fire, to rescue a wounded man who was trapped in a trench. Upon reaching the man, he was faced by an armed enemy soldier whom he killed with a pistol. Moving his comrade to safety and returning to his men, he neutralized the final pocket of enemy resistance by fatally wounding 3 North Vietnamese officers with rifle fire.

S/Sgt. Hooper then established a final line and reorganized his men, not accepting treatment until this was accomplished and not consenting to evacuation until the following morning. His supreme valor, inspiring leadership and heroic self-sacrifice were directly responsible for the company’s success and provided a lasting example in personal courage for every man on the field. S/Sgt. Hooper’s actions were in keeping with the highest traditions of the military service and reflect great credit upon himself and the U.S. Army .[/read]