By May 26 1940, around 250,000 British troops, the rump of what remained of the British Expeditionary Force (BEF), were surrounded in the French port of Dunkirk and being mercilessly attacked by Göring’s Stuka dive-bombers. From the air it seemed that the nearby beaches swarmed with a huge army of ants that rippled with fear as German pilots made strafing runs.

By Alex Kershaw, author of The Bedford Boys, The Longest Winter, Avenue of Spies, The Liberator. 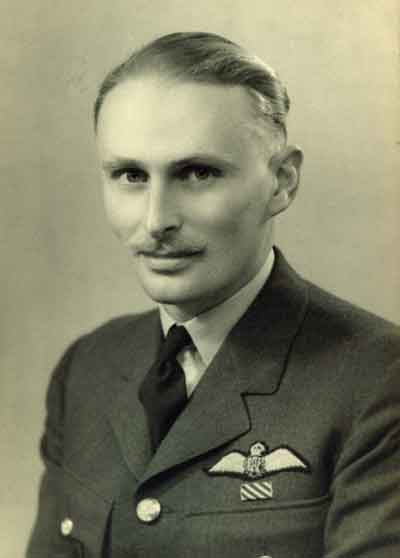 The mood was grim, both on the sand dunes where starving, exhausted Tommies waited for rescue, and in London, where even in Churchill’s War Cabinet there was talk of a compromise peace with Hitler. Churchill ended all such defeatist sentiment, telling his cabinet in an emotionally charged meeting on May 28: “I am convinced that every one of you would rise up and tear me down from my place if I were for one moment to contemplate parley or surrender. If this long island story of ours is to come to an end at last, let it end only when each of us lies choking in his own blood upon the ground.”

Churchill’s defiance was met with cheers and hurrahs. It was clear that he now had every one of his cabinet firmly on his side. “Quite a number,” he recalled, “seemed to jump from the table and come running to my chair, shouting and patting me on the back . . . had I at this juncture faltered at all in leading the nation I should have been hurled out of office. I am sure that every Minister was ready to be killed quite soon, and have all his family and possessions destroyed, rather than give in.”

Just as the cabinet had rallied to Churchill, so would the nation. But first, something had to be salvaged from the disaster unfolding at Dunkirk. Senior commanders hoped that perhaps thirty thousand men, a fraction of the British Expeditionary Force, might be saved. In London, Ambassador Kennedy added his own assessment to the general air of doom, cabling President Roosevelt that: “Only a miracle can save the BEF from being wiped out or, as I said yesterday, surrender . . . the English people, while they suspect a terrible situation, really do not realize how bad it is. When they do I don’t know what group they will follow, the do or die or the group that wants a settlement.” 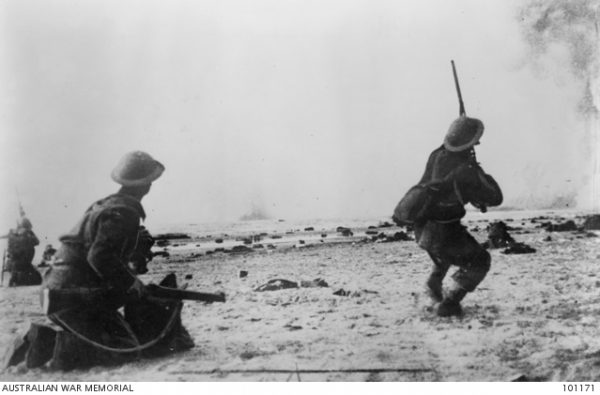 But all was not yet lost. The seafaring nation was beginning to respond to a call for all available vessels to make the hazardous Channel crossing and evacuate men from the bloodstained beaches. All manner of craft, from private dinghies to Thames tugboats, were headed toward Dunkirk. Above the beaches, Fighter Command’s Spitfire and Hurricane squadrons were also now in action, fighting with unprecedented aggression, many of their pilots furious at the sight of their countrymen being mowed down as they waded in long snaking lines toward rescue boats. Even veteran Luftwaffe pilots, who had readily strafed columns of refugees in Spain and destroyed Guernica, soon began to sicken of the slaughter. For twenty-four-year-old Captain Paul Temme, flying at three hundred feet above his victims, it was “just unadulterated killing. The beaches were jammed full of soldiers. I went up and down ‘hose-piping.’ It was cold-blooded point-blank murder.”
The fighting over Dunkirk would be a prelude to the Battle of Britain, and the Luftwaffe and the RAF took careful measure of each other. For the first time, the Germans encountered the full force of Fighter Command, and it was soon clear that the RAF’s Spitfires and Hurricanes were just as lethal as the Messerschmitt Me-109, the Germans’ best fighter. Another thing was quickly obvious: the British pilots were as well disciplined and courageous as their foe in the air, confirming the warning of influential First World War veteran Theo Osterkamp: “Now we fight ‘The Lords,’ and that is something else again. They are hard fighters and they are good fighters.”

For many RAF pilots, Dunkirk was a chaotic and brutal baptism of fire. “The Me-109s were quicksilver,” recalled one squadron leader. “It would have been ideal to come against them as a controlled formation, but the Germans always split up, so somehow you did, too. Then it was every man for himself—which was all right if you were good.” Thankfully, some were very good indeed. They included twenty-eight-year-old Flight Lieutenant Frank Howell of 609 West Riding Squadron, a strikingly handsome, blond-haired former mechanic who, on June 1, 1940, was appointed a flight leader after two days of fierce combat. 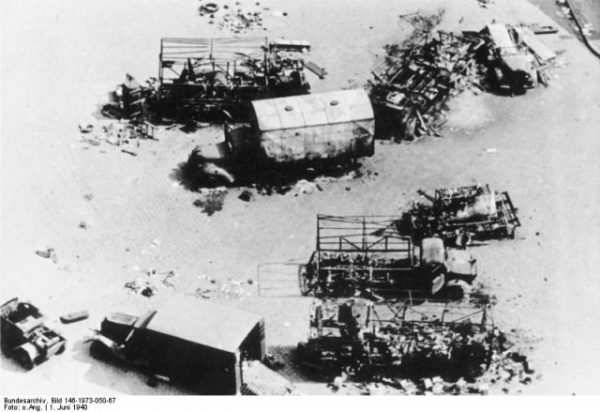 In a remarkable letter to his brother, Howell provided a vivid account of what it was like to fly above the hell of Dunkirk: “The place was still burning furiously, a great pall of smoke stretching 7,000 feet in the sky over Belgium . . Thousands and thousands of A/A [anti-aircraft] shells were bursting over the town . . . I looked down to see salvo after salvo of bombs bursting with terrific splashes in the water near some shipping, and there was a Heinkel, only 500 feet below going in the opposite direction so I did a half roll, and came up its arse, giving it a pretty 2 seconds fire . . . All the way back to England I flew full throttle at about 15 feet above the water and the shipping between England and Dunkirk was a sight worth seeing. Paddle boats, destroyers, sloops, tugs, fishing trawlers, river launches . . . anything with a motor towing anything without one . . . I am indeed lucky to have got away scot free. Dizzy was killed and five other chaps are missing. One was my flight commander so I am now in charge of A Flight, and will get another stripe, and it’s a rotten way to get it.”


On June 1, Winston Churchill was back in Paris, again trying to rally the French and sharing with them the heartening news that more than 165,000 troops had been pulled off the beaches at Dunkirk. Distressingly, his exhortations to fight on to the very end appeared to fall on deaf ears. Churchill’s escort from Paris back to England was to be provided by 601 Squadron, otherwise known as the Millionaires’ Squadron because several of its pilots came from wealthy families. “Winston was ebullient as ever,” recalled an aide. “When we started back he insisted on pacing round the aerodrome to review [601’s] nine Hurricanes, tramping through the tall grass in the flurry of propellers with his cigar like a pennant.”

British Major General Sir Edward Spears remembered “nine fighter planes drawn up in a wide semi-circle around the Prime Minister’s Flamingo . . . Churchill walked toward the machines, grinning, waving his stick, saying a word or two to each pilot as he went from one to the other, and, as I watched their faces light up and smile in answer to his, I thought they looked like the angels of my childhood. These men may have been naturally handsome, but that morning they were far more than that, creatures of an essence that was not of our world: their expressions of happy confidence as they got ready to ascend into their element, the sky, left me inspired, awed and earthbound.” 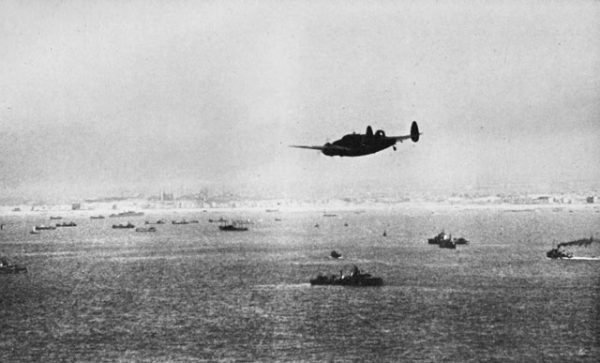 One of these angels, Flying Officer Gordon “Mouse” Cleaver, remembered that morning somewhat differently.13 The night before, the Millionaires had become rip-roaring drunk: “There assembled at Villacou-blay just about as hungover a crew of dirty, smelly, unshaven, unwashed fighter pilots as I doubt has ever been seen. Willie [Rhodes-Moorehouse] if I remember right was being sick behind his aeroplane, when the Great Man arrived and expressed a desire to meet the escort. We must have appeared vaguely human at least, as he seemed to accept our appearance without comment, and we took off for England.”14 By June 4, the evacuation of Dunkirk was officially over with an incredible 338,226 Allied troops removed from the beaches to England. Göring’s promise that “not a British soldier will escape” had been ludicrous. He had simply been “talking big again” as General Alfred Jodl, Chief of Hitler’s General Staff, was quick to point out.15 In a week of almost constant combat above Dunkirk, the RAF had shot down 132 German planes for a loss of 99 of its own fighters, 5 from Flight Leader Frank Howell’s 609 Squadron. It was a remarkable performance, or as Churchill described it to his War Cabinet, “a signal victory which gives cause for high hopes of our successes in the future.”

The British Expeditionary Force had been saved by some 693 boats of all sizes, many of them “little ships”—dinghies, pleasure yachts, skiffs, tugboats—a quarter of which were sunk. But now it had nothing to fight with. Almost all the BEF’s armor and weapons had been left behind, leaving England practically defenseless. The evacuation of Dunkirk could certainly not be described as a victory, but it was nevertheless a powerful tonic to both the British people and the rest of the free world. 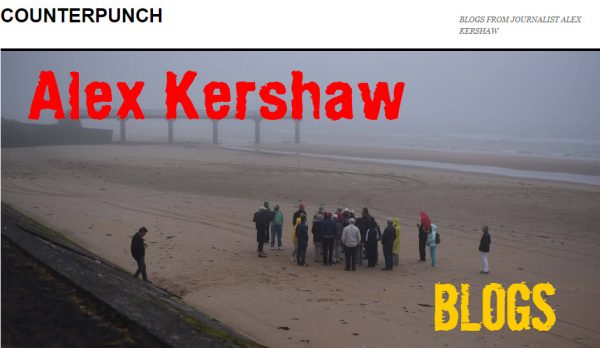