When one looks back at the rich history of the US Airborne, the period that stands out the most, to many, is their proud achievements during the Second World War. Of course, that’s where the Airborne story begins, and the men involved were the fathers of what has become a much loved and trusted branch of the US Armed Forces.

by Adam Berry – Author of And Suddenly They Were Gone

Those brave boys of the 2nd Battalion, 503rd PIR (Later to be re-designated as the 509th Parachute Infantry Battalion) who parachuted into North Africa way back in November, 1942, having suffered an arduous flight riding the steel benches of a C-47 all the way from England, kicked open a metaphorical door through which stormed some of Americas most decorated soldiers, Airborne warriors, tough paratroopers, and Generals who were most at home fighting from the Foxholes among their men. Followed by the 82nd Airborne Division into Sicily, and Italy, as the boys of the 11th Airborne Division prepared to fight the Japanese in the Pacific, the 509th PIB initiated the very first etchings of the Airborne story onto the slate.

These histories can be found in abundance, in any Library or bookshop, wherever you turn. The combat history of each Division, or each independent Battalion or Regiment, can be found with ease. Many cover the same stories, many talk of the same men, and as time marches by it becomes harder and harder to add to those histories something that people have not already read before. But why not consider the time spent out of the combat zone?

Sure, there’s plenty to be read of the training regimes undertaken in the States. The meteoric levels of physical fitness obtained, and the super dangerous parachute training that cost so many a broken bone or two – or their lives, but there’s more to it than that.

Even those early Airborne soldiers of the 509th PIB, the first to see the enemy through the sights of an M1 Rifle, trained for their Operation from campsites in England. The 101st, 82nd, and 17th Airborne Divisions all had campsites in England leading up to combat Operations in mainland Europe, and were afforded the opportunity to train in terrain almost identical to that they would face in France, Holland, Belgium, Germany, Italy, Czechoslovakia, and beyond. But again, there’s more to it than that. I often refer to those from the Airborne Divisions as “boys” because, let’s face it, that’s what they were. Bob Murphy, a Pathfinder with A Company, 505th PIR, was just 17 years old when he first faced an enemy soldier. I write this as a 29 year old with no military background, but I find it incomprehensible to think about doing the same at the age of 17. What were most males doing at 17? Chasing girls, playing Football, doing homework for High School, cleaning their new car? It’s fair to assume that the combat in Sicily and Italy made Bob Murphy grow up, and fast, but when he reached England with his Regiment, and found his campsite to be located in the quaint Leicestershire village of Quorn he was, after all, still only 18 years old and that adolescent excitement was still ripe in him. 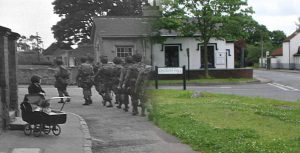 Paratroopers of the Demolition Platoon, Regimental HQ, 507th PIR, march through the village of Plumtree, Nottinghamshire, close to their campsite at Tollerton Hall at the end of May, 1944. The following day these men were trucked to their embarkation airfields for D-Day.

England was a new country to all but for a select few who had perhaps been lucky enough to visit before war broke out. Many had heard of the incessant bombings by the Luftwaffe, and of the rationing that had many families struggling for food each week, and expected to arrive to war-torn shores much like those they had encountered in Italy. The reality, however, was somewhat different.

As a Brit, I am proud of the resilience and stubbornness our country showed in the face of adverse conditions, and how we held our chins aloft and got on with life day in, day out, maintaining the small things that make us what we are. This is something that immediately struck members of the 82nd Airborne Division when arriving in England. Where were the shattered streets? The smoldering factory buildings or the ruins of terraced houses? England was alive, and kicking, and when the “Capetown Castle”, carrying the 504th PIR into Liverpool harbor fresh from the horrific combat at Anzio, pulled up against docks, there was such an air of excitement amongst the Paratroopers on board that all rushed to one side of the vessel causing it to list heavily. They were amazed by what they saw. Pleasure boats, adorned with scantily dressed young women, sailed by. The streets were clean, with locals waving, welcoming their American cousins ashore. Gardens with rose bushes, and immaculately maintained allotments of vegetables stretched as far as the eye could see, and finally those boys of the 504th found the smile that many thought they had lost forever in the mud of Anzio.

Liverpool was nice, but after a train journey of a few hours had carried the men 100 miles South, they finally found themselves in their new home, a tented Camp just slightly South of the Leicestershire village of Evington. Many couldn’t believe their luck, the area was beautiful countryside, so green and lush, and Evington itself was the sort of English village some had read about in books. They were also within walking distance of Leicester, the nearest City to their camp, where there were more pubs and clubs than one man could ever need.

Elsewhere the other Regiments of the Division had already been in the country for a few months. The 505th PIR in Quorn, and the Glider-Riders of the 325th in Scraptoft. Luckier still, Airborne Artillerymen of the 456th Parachute Field Artillery, and the 319th and 320th Glider Field Artillery Battalions found their campsites to be in the grounds of incredible English country homes, such as Highfields House and Papillon Hall. These buildings pre-dated any that could be found in America, and represented history that those camped there had never seen before. Joined by the 507th and 508th PIR’s in Nottinghamshire, the Division was now fully assembled across campsites in Leicestershire/Nottinghamshire area and ready for a period of rehabilitation to bring it back up to scratch, both in terms of numbers and the standard on which the Division had built a fearsome reputation.

Training was conducted in the fields around their campsites, route marches took them to live firing ranges established in valleys or parkland requisitioned by the Government, and rehearsal parachute drops were conducted as and when they could be planned with the Air Force. Inevitably, fatalities took place, mainly on the Parachute jumps but also in considerably violent circumstances. Two members of the Division were stabbed to death in riots involving black soldiers in Leicester in which it is believed members of the 504th PIR attempted to take over a pub reserved for use with black soldiers. These deaths led to more violence, but the impending invasion of Europe brought a welcome distraction and ended those hostilities. 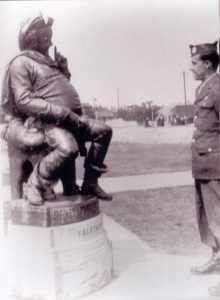 The most vitally important aspect of the Divisions presence in England, however, was the relationships established with the English populace, and the care shown to those “boys” that were so, so far from home. It is estimated that in excess of 80,000 GI’s married British girls during the war, and of that number many involved members of the 82nd. They included, to name but a few, PFC Tony De Mayo, a Pathfinder with the 505th PIR, William Mulligan of F Company, 505th PIR, and Herb Huebschen of the 325th GIR. Another was SGT George F Huston, of the 505th PIR, a man who jumped from the same aircraft as (the then) Colonel James Gavin over Italy. Motherly instincts also took over, as those who had already lost sons to the war in one way or another took GI’s into their homes as if they were members of their own families. Many offered up food and drink that had become so hard to obtain through rationing that they ate less as a result. But to them it didn’t matter, because as far as they were concerned they were offering up a final dose of comfort to guests who would soon be headed off to war again, with many meeting violent deaths. One must take a second to remember the discomfort these young boys felt in being so far away from home, yet the love and gratitude most experienced in the presence of English hosts in the months and weeks leading up to their deployment to a combat zone must have eased that discomfort significantly. When the Division disappeared, for what we now know to have been the spearheading of the invasion of Europe, English families across the country felt the tremendous loss almost as much as their real families did back home in the States. What’s more, when they returned as battered, bruised remnants of the Divisions that had left, the English mourned those had had been killed.

One English girl, 16 at the time, was befriended by a paratrooper of the 505th called John W O’Daniel Jr. As it happened, O’Daniel Jr was the son of John W O’Daniel Sr, who at the time Commanded the 3 rd US Infantry Division. O’Daniel Jr was killed in action in the Dutch City of Nijmegen, on 19 September, 1944. The young girlfriend he left behind still, to this day, thinks about him and struggles to contain her emotions when she thinks about his death. This is not only because of the strong emotional bond she had developed with him, but also because of the real tragedy that is the loss of such a young man, with plenty of life still left to live. Of course, this rings true across the entire Division. Young men were lost in too great a number, and some would never be given the chance to truly appreciate their reasons for fighting. They did what they did, without question and without any doubt that what they were doing was right, and ultimately we as a nation (Great Britain) owe an incredible debt to those who came here, stole our hearts, and gave everything they had to rid Europe of such an evil tyranny.[/read]