With food being scarce during the Siege of Bastogne the defenders of the battered bastion instinctively searched for alternatives to fill their aching stomachs.  However, one of these famished men was unable to eat his meal until sixty-four years later. 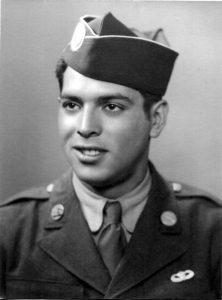 It was a tough winter back in 1944. Almost starving and enduring hypothermia made it nearly impossible for the men of Five-O-Deuce (502 Parachute Infantry Regiment, 101st Airborne Division) to make a stand against the ongoing German attacks and artillery fire. Along with his buddies from B-Company, bazooka-man Amos J. Almeida tried to get comfortable in his trench, just north of the Church at Champs, an outpost to Bastogne.

“The cold was killing us and the lack of food didn’t make it any better.”, he said. “ Then I witnessed an eluded pig being killed by a shell fragment.” (Amos later admitted the pig was shot by a ravenous G.I.). As hungry as a horse, Almeida sprinted toward the dead animal and cut a large piece of  meat out of it with his trench-knife.

“I couldn’t use it right away”, he recalled, “I needed to let it rest before I could cook it and eat it. So I hung it on a fence post, next to my  foxhole.”. Shortly thereafter Amos was called out to collect some bazooka-ammo south of the village. With shells strapped to his chest and back he returned to his former position an made a terrible discovery. The meat was gone. “Some slick B*****D, stole my food!”.

For the first time ever, in 2006, Mr. Almeida and his family attended the 101stAirborne Reunion. “It was wonderful to see my comrades again after so many years.”, he said. One of the highlights was catching up with his war-pal Tony Lujan. They talked about everything they went through together in WWII but suddenly their conversation faltered when Tony stroke a chord. 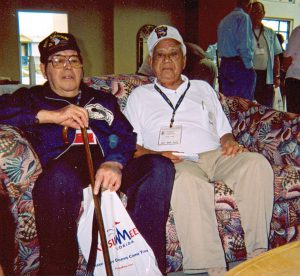 “He said that he wasn’t that hungry in the Bulge and that some idiot left some meat hanging on a pole in Champs. He had taken and eaten it. It was a darn fine piece of pig.“, Amos choked.

In the spring of 2008 the Almeidas made it back to Europe to walk the steps of B-Company 502 PIR. In Champs a nice surprise was waiting for them. Local inhabitant and WWII enthusiast  Raphael Giot had set up A BBQ party for Amos and his gang with bacon and pork chops being the main course.

Finally after 64 years, this fine paratrooper finally could enjoy his piece of pig on the former battleground.

“I want to send the ticket to Tony”, he ended his story.

Pfc. Amos J. Almeida (12/28/1921 – 8/31/2012) was rewarded with a Bronze Star for exposing himself and knocking out an armored vehicle at close range with his bazooka during the Christmas Day breakthrough. By permitting his platoon to engage and repel the German tanks, this heroic act contributed greatly to the successful defeat of the enemy attack and infantry.