Original footage from the British Pathe archive shows impressive shots of the LZ 129 ‘Hindenburg’ flying overhead and crashing on its landing ground at Lakehurst NJ, on ThursdayMay 6, 1937. 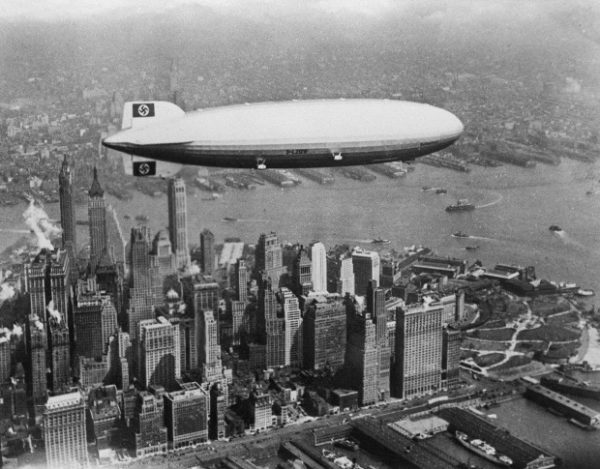 The disaster killed 35 persons on the airship, and one member of the ground crew, but miraculously 62 of the 97 passengers and crew survived.


After more than 30 years of passenger travel on commercial zeppelins — in which tens of thousands of passengers flew over a million miles, on more than 2,000 flights, without a single injury — the era of the passenger airship came to an end in a few fiery minutes.

Actual construction of LZ-129 began in the Fall of 1931, but progress lagged due to a severe lack of funds during the Depression. At first, the Nazi Party’s assumption of power in January, 1933 had little effect on the fortunes of the Zeppelin Company, partly due to Air Minister Hermann Göring’s dislike of lighter-than-air flight. But Propaganda Minister Joseph Goebbels was aware of the potential symbolic value of LZ-129 as a showcase for German strength and technology, and in 1934 Goebbels offered Hugo Eckener 2 million marks toward the completion of LZ-129.

Nazi officials were very much aware of the symbolic value of the huge and impressive airship, and frequently called on Hindenburg for propaganda flights, often in company with the Graf Zeppelin.

Hindenburg made appearances at public events such as the 1936 Berlin Games and the Nuremberg Party rally, and Hindenburg’s first major flight, after test flights were completed, was a 74-hour propaganda flight in support of Hitler’s remilitarization of the Rhineland. 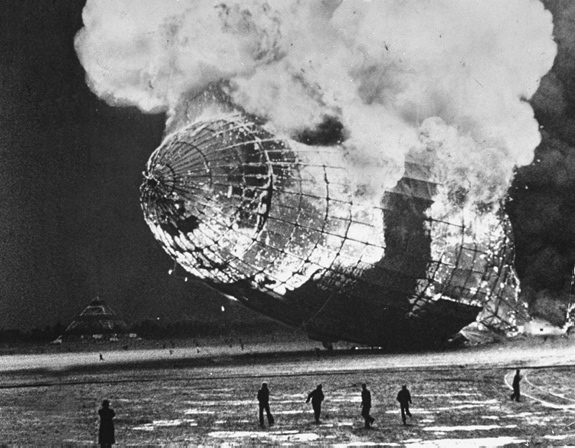 At 7:25 p.m. local time, the Hindenburg caught fire and quickly became engulfed in flames. Eyewitness statements disagree as to where the fire initially broke out; several witnesses on the port side saw yellow-red flames first jump forward of the top fin near the ventilation shaft of cells 4 and 5. Other witnesses on the port side noted the fire actually began just ahead of the horizontal port fin, only then followed by flames in front of the upper fin. One, with views of the starboard side, saw flames beginning lower and farther aft, near cell 1 behind the rudders. Inside the airship, helmsman Helmut Lau, who was stationed in the lower fin, testified hearing a muffled detonation and looked up to see a bright reflection on the front bulkhead of gas cell 4, which “suddenly disappeared by the heat”. As other gas cells started to catch fire, the fire spread more to the starboard side and the ship dropped rapidly. Although there were cameramen from four newsreel teams and at least one spectator known to be filming the landing, as well as numerous photographers at the scene, no known footage or photograph exists of the moment the fire started.

Wherever they started, the flames quickly spread forward first consuming cells 1 to 9, and the rear end of the structure imploded. Almost instantly, two tanks (it is disputed whether they contained water or fuel) burst out of the hull as a result of the shock of the blast. Buoyancy was lost on the stern of the ship, and the bow lurched upwards while the ship’s back broke; the falling stern stayed in trim.

As the tail of the Hindenburg crashed into the ground, a burst of flame came out of the nose, killing nine of the 12 crew members in the bow. There was still gas in the bow section of the ship, so it continued to point upward as the stern collapsed down. The cell behind the passenger decks ignited as the side collapsed inward, and the scarlet lettering reading “Hindenburg” was erased by flames as the bow descended. The airship’s gondola wheel touched the ground, causing the bow to bounce up slightly as one final gas cell burned away. At this point, most of the fabric on the hull had also burned away and the bow finally crashed to the ground. Although the hydrogen had finished burning, the Hindenburg’s diesel fuel burned for several more hours.


The time that it took from the first signs of disaster to the bow crashing to the ground is often reported as 32, 34 or 37 seconds. Since none of the newsreel cameras were filming the airship when the fire started, the time of the start can only be estimated from various eyewitness accounts and the duration of the longest footage of the crash. One careful analysis by NASA’s Addison Bain gives the flame front spread rate across the fabric skin as about 49 ft/s (15 m/s) at some points during the crash, which would have resulted in a total destruction time of about 16 seconds (245m/15 m/s=16.3 s).

Some of the duralumin framework of the airship was salvaged and shipped back to Germany, where it was recycled and used in the construction of military aircraft for the Luftwaffe, as were the frames of the LZ 127 Graf Zeppelin and LZ 130 Graf Zeppelin II when both were scrapped in 1940. SOURCE